This is one the first prototypes I’ve worked on as part of the the EAE program. This game is a retro style shooter iteration of the classic Atari game Centipede.

Just like the premise of most arcade shooters, the aim is to survive wave after wave of robotic cyberpedes and rack up the highest possible score. 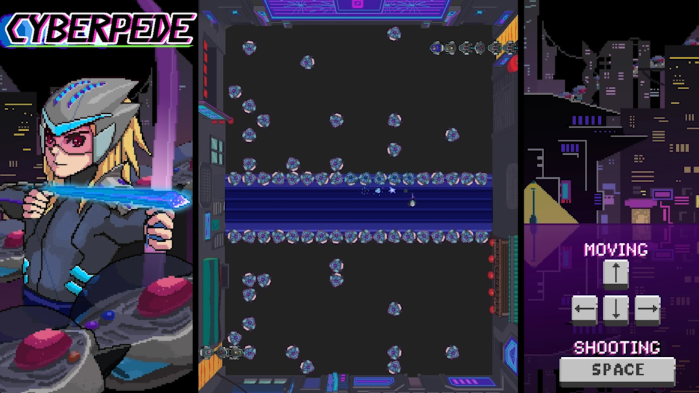 We had almost 3 weeks to work on this prototype and we ended up adding a lot of features into the final game (against the advice of our teachers!).

Play the game here!. Play in Full Screen for a better experience (F11)

I set up the score and health systems, player controls and bullet dynamics.

For this project we had a design limitation to only use the WASD keys for movement plus one extra action key. As such I decided to limit the players movement area and controls which ultimately led to the design decision to have two cyberpedes spawn from both sides of the player.

The score is displayed on the top center and looks like its part of the game world to give it a more diegetic feel. And to notify the player about where the score is displayed, whenever a cyberpede section is destroyed, the points gained hover there for a bit and then fly off to the score.

The players bullet shooting speed is linked to how many bullets are there on the screen. So you shoot faster the closer the cyberpede is to you (because the bullets get destroyed faster)

For the cyberpede I work on its turret and homing sections.

The red Homing section when shot at moves towards the player in a straight line, continuously spawning debris and, when close enough, explodes; forcing the player to keep moving. It also serves a mid to end game goal of creating lanes, which the player can use to funnel the cyberpedes.

While the turrets on both cyberpedes continuously track and shoot at the player they also serve the purpose to destroy debris so that the cyberpede doesn’t get stuck and also, so that the player cant always hide behind the wall of debris that spawns in the beginning.